The towns of Japan’s YUKIGUNI region contain a variety of ryokan hotels that represent the best of Japanese tradition as well as the future of luxury hospitality in this country. Bettei Senjuan is a boutique eco-lodge that is at once peak luxury and also forward thinking. The inn consists of only 18 rooms, each with their own unique style, spacious sleeping quarters, and even private onsen-style baths. In the case of the latter, Bettei Senjuan was the first hotel in the country to provide this.

Bettei Senjuan was built in 1997. While there were originally plans to put high-rise apartments in this location instead, the town of Minakami has put limits of the height of buildings and various details about their construction in order to preserve the surrounding environment. Senjuan was thus built to blend in with and enhance the local scenery. This eco-lodge was constructed partly from local wood and clay by local craftsmen. The shoji panels were done by Niigata artists and the washi is also hand-crafted. The inn overlooks Mt. Tanigawa and was designed to give guests the best possible view of this beautiful scenery, which means a wide open floorplan with giant glass windows that are perfect for looking at the beautiful Japanese gardens on the grounds during the day, or watching the stars at night. As recognition for their unique and beautiful eco-lodge, Bettei Senjuan has been given design awards by the Architectural Institute of Japan.

In the past, many ryokan used energy sources that were less environmentally friendly, such as relying on kerosene heaters during the long Snow Country winters. These require regular ventilation to be used safely and are also not very energy efficient. Onsen hotels also rely on the water from their natural springs. As we are finding out all over the world, the scarcity of good water sources threatens our very way of life. The area around Bettei Senjuan has three different springs, and in an effort to better utilize their water, the inn has installed heat exchangers which heats and cools the water, and also uses it to heat or cool the building to save both water and electricity.

For their efforts, Bettei Senjuan has been given the prestigious Green Key Award by the Foundation for Environmental Education, an international organization based in Denmark which uses over 100 categories to stringently judge whether each hotel is being run in a sustainable fashion. Some of these sustainable initiatives include switching 75% of their lighting to high-efficiency LED lights. Bettei Senjuan is dedicated to not only reducing their electrical footprint and the amount of water they use, but they also aim to reduce food waste, such as reusing ingedients for stocks for soup. Not only with regards to food purchasing, but 80% of the suppliers for construction and utilities such as electricity, gas, and water are also sourced locally.

The Food Culture of Minakami and Snow Country

Bettei Senjuan, while having a considerable selection of meals for guests to enjoy, seeks to educate their visitors about the benefits of Gunma’s local cuisine. Offerings include a premier range of Gunma meat products such as Joshu and Masudagyu beef, and Mugibuta pork from Maebashi.

However, in this region people traditionally ate more fish than meat. Lately, local innovations have produced a type of nijimasu rainbow trout known as ginhikari. This so-called “silk salmon” is free range and given a special diet so they grow incredibly large. Because of their great taste they are popular with locals and travelers alike.

YUKIGUNI in particular is known for its mountain vegetables, or sansai. These are locally grown and used in Japanese dishes like nimono and zensai. The maitake mushrooms grown around Minakami are large and delicious, and are often used as a main dish.

Community initiatives to ensure our future

These days, the owners of Bettei Senjuan are working together with the local government to produce initiatives that can ensure the future of their town. Nearby Mt. Tanigawa is vital to the local economy, and is considered a symbol of Minakami as well as Bettei Senjuan. Every year, the staff at Bettei Senjuan work hard to maintain and restore the trails at Tanigawa. As onsen are the lifeblood of tourism in Minakami, the owner of Bettei Senjuan occasionally conducts lessons at local primary schools extolling the value and charm of onsen to the local children who will one day inherit them.

Speaking of locals, about 40% of Bettei Senjuan’s staff hail from the area around Minakami. Even if kids here often do grow up and leave town, it is important that they can have opportunities to work and live back in Minakami. Providing stable jobs locally is one important way to try and help stabilize the population in this rural region. Bettei Senjuan also provides support for local festivals, and have fitted the eco-lodge to be used as a shelter during emergencies.

Bettei Senjuan has become sort of a natural retreat where people can revitalize themselves while surrounded by nature in quiet comfort. It is hoped that the natural charm and progressive thinking of places like Bettei Senjuan can also help reinvigorate this part of the Japanese countryside. 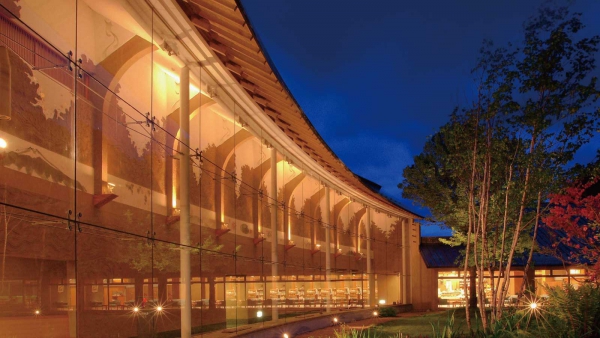