A Sustainable ECOLODGE in Snow Country

One of the premier ECOLODGEs in the Snow Country (or YUKIGUNI) region of Niigata is Hinanoyado Chitose at Matsunoyama Onsen. This hot spring village in Tokamachi City is committed to both preserving its history as well as creating a comfortable and sustainable environment for their guests at their hot spring inns.

The beginnings of Matsunoyama Onsen

A record of a hot spring at Matsunoyama first entered history approximately 800 years ago. Legend has it that people discovered the hot spring after watching a wounded hawk, who would come to the same spring every day to nurse its wounded wing. Travelers from around the country came to experience this healing spring, and Matsunoyama Onsen soon established its reputation as one of the top 3 medicinal onsen in Japan. This is due to the fossilized seawater underneath the town that was trapped there nearly 12 million years ago as a result of volcanic activity. The resulting heated water that bubbles up to the surface has a notably high salt content as well as high concentrations of boric acid, which has notable antiseptic properties and also helps improves blood flow.

The story of Hinanoyado Chitose

Hinanoyado Chitose is a progressive, top-class hotel where you can experience these healing spring waters in convenience and comfort. This inn is perfectly suited to international travelers, including those with dietary restrictions, or even those with tattoos- which traditionally was a barrier to enjoying the Japanese cultural practice of bathing at an onsen.

Chitose also aims for sustainability by using the energy below their feet to make fine cuisine. One of their staples is toujibuta, which is pork that has been slow-cooked in the onsen water for 3 hours sous vide-style. The resulting protein takes on an immensely tender consistency similar to roast beef. Onsen tamago, or hot spring eggs, are also a staple at hot spring villages. The ones at Matsunoyama, known as touji tamago, are cooked for 24 hours in the hot spring water. In addition to their great taste, they are considered a folk remedy for warding off colds in the Snow Country.

Not just Chitose, but the entire hot spring town have taken steps to becoming self-sufficient. In 2020, Matsunoyama finished building a geothermal power plant. They will alternate between selling the power as well as using it to power the town. The proceeds are then put back into the town itself; in this way, the water trapped under the town has and continues to be the means for Matsunoyama’s very survival. To make life easier during the harsh winters, this very same water is also used to heat the roads as a means to melt the copious amounts of snow.

In considering the local environment, Matsunoyama also make efforts to preserve their local culture, such as a preserved farmer’s house called “Jiro.” The people living in and around Matsunoyama typically relied on farming to make a living. Though they were often poor, and lacked the conveniences that people take for granted today, they also were responsible for many innovations, which the town aims to preserve. Foremost to Snow Country culture is the presence of kominka, old-style farmer’s houses, and irori, their signature hearth.

Though you can find irori at some local ryokan, at Jiro you can see it as it originally was. The irori served a multitude of functions besides a way to get warm. The smoke from the irori actually helped strengthen the wood in the house. In this way, even old wooden houses could survive the harshest Niigata winters in Matsunoyama.

Now Jiro has become a tourist attraction in and of itself. The flooring is heated, and you can sit around the irori and enjoy some of Matsunoyama’s signature cuisine. In the winter season, it is the gathering place for couples who participate in the town’s famous Mukonage festival, where newlywed grooms are tossed down a snowy hillside. Outside of the winter season, it is also open to the general public, though only on weekends and holidays.

Matsunoyama Onsen is ready to welcome you!

Hinanoyado Chitose at Matsunoyama Onsen village is an ECOLODGE where you can comfortably enjoy the beautiful natural scenery of Snow Country. There are both Japanese and Western style rooms, and some of the rooms also contain their own private onsen, allowing you to experience the joys and health benefits of Matsunoyama Onsen’s healing spring without leaving your room. The local cuisine, which is locally-sourced at Chitose, simply can’t be beat, and the scenery, whether it be the fall colors or the famous winters, promise a once-in-a-lifetime experience. 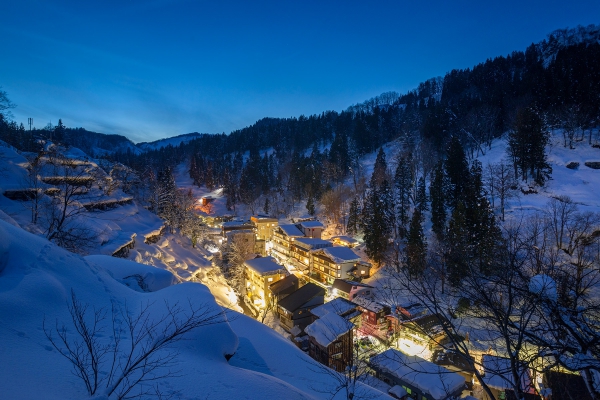